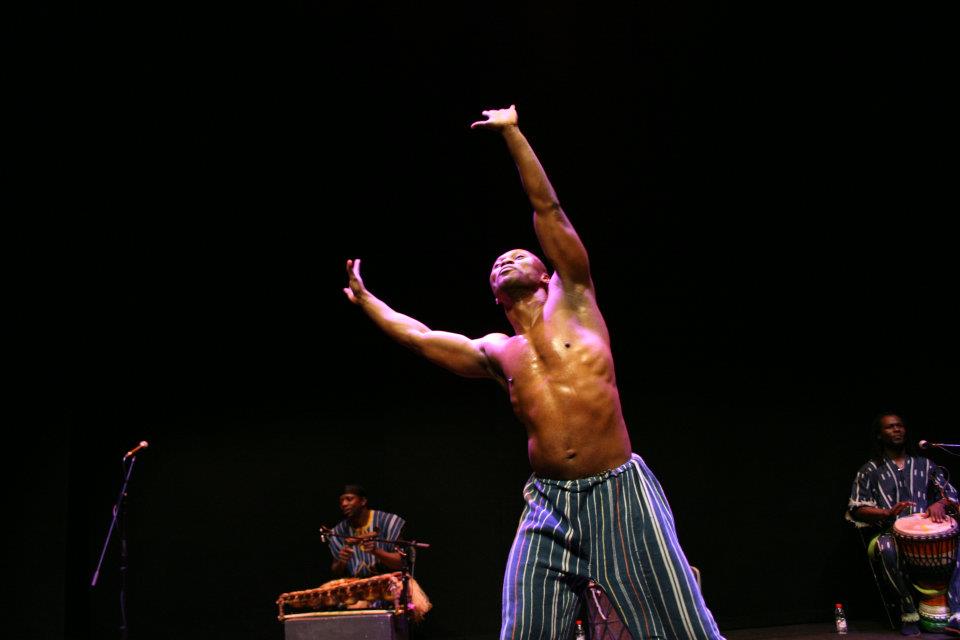 Amédé Nwatchok was born in Douala, the economic capital of Cameroon. At just seven years old, he discovered the world of dance and at the age of 10 he joined Cameroon´s National Ballet.
He has been teaching dance and creating choreographies since the age of fourteen, primarily with the Cameroonion dance company “Les Pilies du Mbam”. At the age of seventeen, he produced his first choreography “Lieu Gong” (Le combat du temps) with his own company “La Salamandre”. Next, he played the role of dancer and choreographer in several dance companies: Kameleon (Cameroon), Afrika d’Ivory (Ivory Coast), Nalle Club (Ivory Coast), Djokoto (Togo), Invencio (Catalonia), Aklipso (Barcelona), Allo Allo (Spain), Afrika Vive (Spain), etc…

In 2004, he moved to Barcelona where he pursued his career as a dancer, dance teacher and choreographer, and also as a storyteller, actor and musician.

For Amédé Nwatchok, dance represents one of the most ancient arts, regardless of the cultural origins of the dance. Practicing dance creates an equilibrium and a balance between the different parts of the human being. The physique is the first aspect to benefit, including an enhanced functioning of the heart, improved blood circulation, and the oxygenation and massage of the internal organs. Dancing involves the release of large quantities of hormones which have been linked to mental and physical well-being. It has a liberating effect on the mind, acting on the memory, concentration, self-control, etc…
At the same time, dance plays a key role in the social cohesion of a group; it brings people together based on a common interest and always respecting their personal level of development and awareness of their own body and their emotions.

From 1990 to 1998
Dancer in the Cameroonian National Ballet; participated in several festivals in Africa, Europe and America.

1996
Started to teach dance and created his first choreography.

1998
Started to research the wealth of modern African dance, and presented his second choreography in Cameroon entitled ¨Beuna Wii Afrika¨ as part of an AIDS awareness event organized by the company TotalFinaElf, where he won the first prize.
Presented ¨Beuna Wii Afrika¨ at the gala evening of the Lions of Cameroon organisation at Hotel Sawa in Douala.
Choregrapher in the dance company ¨Gwass du Mbam¨. Obtained several prizes in diverse festivals in Cameroon.

2001
Created his fourth work ¨ L’ingratitude des humains¨ and took part in festivals in Africa and in Europe. Won first prize in the festival “Guinness Cameroon”. Partipated in a contemporary dance course organized by the Centre Chorégraphique National of Nantes in Douala, Yaoundé (Cameroon), Ouagadougou (Burkina Faso) and Nantes (France).

2003
Participated in a contemporary dance course at the Museum of Contemporary Art in Barcelona, Spain

2007
Acted for the company ¨T6¨ directed by the National Theatre of Catalonia, Spain, as part of Pau Miró´s project ¨Singapore¨, Spain

2008
Participated in a cultural exchange as part of the Santa Eulalia festival in Ibiza, Spain
Acted in Bi Makomé Inongo´s work ¨La tentation des esprits¨  as part of Inongo´s company ¨Itondi Kribi¨
Participated in the festival of dance and percussion in Bilbao organized by the association Billuts, Spain
Acted in the French production “Crème de la Crème¨ created by les Ressources Educatives, Spain

2009
Participated in the festival ¨Les Nuits Métisses¨ in Auxerre, France and in the festival of dance “Sans Frontières¨ in San Pedro, Avila, Spain.
Choreographer for the “Gabalgata de reyes” (an annual Christmas traditional street procession which symbolizes the arrival of the three kings) on behalf of Barcelona´s Institute of Culture, Spain

2010
Participated with his company La Salamandre in the international folklorique festival ¨Tradicionaruis¨ in Barcelona, Spain.
Participated in a not for profit festival in Seu d´Urgell, Catalonia, Spain.
Partipated in the International Festival of Antioquia, Colombia.
Presented his eighth contemporary dance choreography entitled ¨Femme Sacrée¨ in Hamburg, Germany.
Choreographer for the “Gabalgata de reyes” (an annual Christmas traditional street procession which symbolizes the arrival of the three kings) on behalf of Barcelona´s Institute of Culture.
Choreographer for the Festival of Street Music in Sant Cugat, Catalonia, Spain.
Presented “Femme Sacrée” at the International Festival “Africa Vive” in Madrid and at the National Museum of Anthropology in Madrid, Spain
Created his ninth contemporary dance work entitled “Vahe Voo Sangui” and presented it at the Festival “Africa Vive” in Bilbao, Spain and at the International Festival “Ordino” in Andorra.
Choreographer for the work “Sunnù” as part of La Merce Festival organized by Barcelona´s Institute of Culture and presented at the Grec theatre and in Park Ciutadella, Barcelona, Spain.

2011
Presented his contemporary African dance work “Vahe Voo Sangui” in the municipal theatre of Banyoles, Catalonia, Spain.
Presented “Femme Sacrée” at the auditorium in Cotxeres Borrell in Barcelona, Spain.
Participated in the festival of national and international folk dance of Calama, Chile.

September 2012
Moved to Marseille, France, where he teaches African dance.

2014 – 2015 – Give African dance and music classes in various schools in Marseille, France

2015 – Participated in the international festival Les Nuits Metisses in Rennes with the group Saiko Nata.
Presented new creation “Assia”with the Association Mamanthé as part of the Kadanse Caraibe festival at the Cité de la Musique, Marseille.

2015 – 2016 – Give African dance and music classes in various schools in Marseille, France

2016 Participates in  with his dance group and percussion Marina beach Vitrolles, France

2017 presents its new creation (the Mask) at the International Conservatory of Dance and Music in Martigues, France

2017 animates the Solidarity workshops of African dance with the association Mamanthé at the Center Social Julien for an audience of women in insertion, France

2017 Dance performance, singing and percussion (Mbale) in the allées of Provence in Aix-en-Provence, France

2016 – 2017  Give African dance and music classes in various schools in Marseille, France

2017 participates in the festival Kadanse Caribbean at the city of music Marseille, France

2017 – 2020 Give African dance and music classes in various schools in Marseille, and Birmingham, England